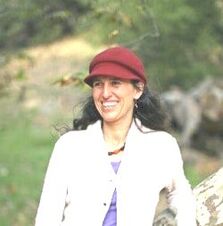 Born in Riga, Latvia, Lia Grippo spent many of her earliest years foraging and fishing the woodlands with her family.  Her early relationship with Nature has remained a constant thread in her life. At an early age, Lia was drawn towards working with young children and has been an early childhood educator since 1989.  In 1996 Lia founded her first preschool, Seedlings, and in 1998 she opened Wild Roots Forest School, a preschool and kindergarten roofed by the sky and carpeted with the living woodland floor.  Lia is a storyteller, naturalist, herbalist, parent educator, mentor and education consultant. Using the arts of storytelling, song, poetry, movement, and play, Lia is dedicated to helping children and families develop their powers of imagination, and through these powers discover their relationship with all of life.   Lia has brought knowledge, compassion, reverence, and magic to her community not only through Wild Roots Forest School,  but also through workshops, seminars and mentoring for adults.  Having trained and mentored dozens of early childhood educators through her years, she is excited to have co-founded Academy of Forest Kindergarten Teachers, which offers formal training for forest kindergarten teachers. Lia's commitment to excellence sets a high bar in this fledgling field in North America.  Lia is the grateful mother of two tree climbing boys and wife of an exquisite musician. 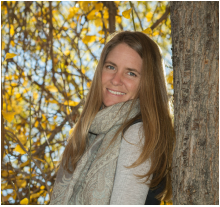 Erin Boehme grew up freely exploring the pastures, creeks and high deserts of the Eastern Sierra, this is where she truly learned about early childhood. Her passion to work with children and families in nature has led her on a journey into teaching. While studying early childhood education and child development, Erin worked as a Public Project Coordinator at Kidspace Museum in Pasadena. In 2000, Erin traveled to Italy to study in the Reggio Emilia Municipal Schools and returned to Santa Barbara to teach preschool and mentor student teachers at Santa Barbara City College Children's Center, volunteer for Wilderness Youth Project and teach kindergarten at Wild Roots Forest School. Erin has been a member of the board of directors for Quail Springs Permaculture, and is a current member of the advisory board. Erin is co-founder and instructor for Academy of Forest Kindergarten Teachers.   After 19 years in Santa Barbara, Erin has returned to her homeland in the Sierra Mountains where she directs and teaches Wild Roots Eastern Sierra Programs based on her more than 20 years experience in early childhood education.  She is an artist and designer that seeks to fuel the creative spirit in herself and others everyday.  She is mentored by her two children and still runs barefoot exploring in nature. 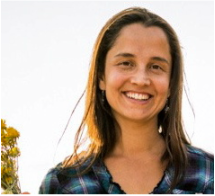 Kolmi was born in Bengal and grew up in northern California, playing in the redwoods and riding bikes and buses.  She served as a youth mentor and mentor-trainer for Wilderness Youth Project before joining the founding team of Quail Springs Permaculture learning center in the Cuyama Valley, where she served as director of educational programs for ten years in residence.  She is a cofounder of Academy of Forest Kindergarten Teachers. Kolmi has a master's degree in Counseling Psychology;  she provides counseling for adults and children as an Associate Marriage and Family Therapist.  She lives in Santa Barbara with her husband and children.
​ 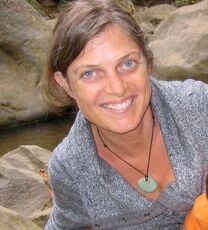 Jenn has a deep love of and appreciation for nature and all its wonder-filled gifts. She grew up in South Lake Tahoe exploring fresh water lakes and streams, climbing granite boulders and mountains and has always sought refuge in the natural world. She graduated from UC Davis with an emphasis on Spanish language and literature, completed graduate work in Spain through New York University, and obtained her Bilingual Teaching Credential through New College of CA in San Francisco. Her interest in and love of Spanish language and cultures began at an early age and led her to pursue living and studying abroad in Mexico and in Spain. She has been a bilingual educator here in Santa Barbara since 2008 (at Cesar Chavez Charter School, Orca School and Wild Roots), and a mentor for Wilderness Youth Project since 2012 .  In 2018, Jenn completed level 3 training with the Academy of Forest Kindergarten Teachers.  She is daily mentored by her own spirited boy, who brought her out of the classroom and into the wilds. With her feet on the earth roaming barefoot on the land, singing songs and playing games with the wee ones, she is grateful to experience curiosity alive, and to share in the magic that is everywhere. She loves working with her hands, tending the land, and all opportunities to share and offer gratitude. She is also deeply committed to weaving a vibrant tapestry of sustainable communities.